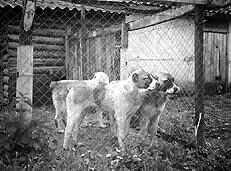 Central Asian Shepherd Dogs have balanced-quiet type of higher nervous activity characterized by mobility as well as high, stable and uniform strength and steadiness of nerve processes. This is manifested in the genetically fixed behavioural responses: they are quiet, not fussy. It should be noted that females are more flexible and dynamic in behavior than males.

Reaction to stimuli in these dogs is quite long. They can be distracted by either removing a provoking factor or by introducing another strong irritant.

This breed is simply indispensible for someone looking for a reliable and undemanding friend and caretaker for their possessions. Central Asian Shepherd Dog harmoniously combines features of primitive shepherd/guardian mountain dogs and of other kennel-bred molossoids. These dogs are proud, independent, self-reliant, confident, gloomy, mysterious and suspicious of strangers. At the same time they are very intelligent and sensitive to the slightest mood swings of their owner.

CASD do not seem rude or rustic. Even as puppies they appear serious and a little bit arrogant animals.

Dogs of this breed have highly developed social instincts: if kept together they readily form packs. They quickly identify their position in the hierarchy of the owner's family.

CASD are usually on good terms with other pets and family members of the owner. Purebred Central Asian Shepherd Dogs are moderately aggressive towards strangers and do not have the habit of attacking a human without warning and presence of provoking factors.

Particularly noteworthy is their tendency to vagrancy and gathering. When one notices these traits one should urgently take drastic disciplinary measures. However these traits are more inherent in males rather than females. Also having a bitch in a pack would keep the dogs from wandering away.

One trait of their character is of particular interest. It is a typical defensive reaction of an active form. These dogs have an innate sense of ownership, their aggressiveness is of distinctly territorial nature. 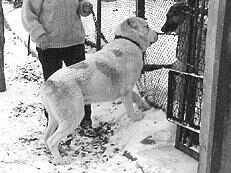 Usually, when outside of their territory Central Asian Shepherd Dog is indifferent to strangers and other dogs. It is respectful of other dog's territory. On the other hand, they don't tolerate others invading their territory.

On the walk CASD usually behave like a gentleman. However sometimes they show wanton aggression towards other dogs. It should be noted that the leash is a good deterrent for these dogs. While on a leash they will never be just barking at something or someone, they will never get hysterical.

A characteristic feature of this breed is a clear sexual dimorphism manifested not only in the exterior but also in behavioral responses.

Males exhibit courage in protecting their domain. they silently rush into battle when intruder crosses the border of their territory. Females are more cautious. They have a pronounced tendency to bark at an intruder from afar and to block the road for quite some time without trying to grip the enemy. They attack actively only in extreme cases.