A dog automatically protects itself and its environment from everything that it deems dangerous or concerning. Therefore throughout the history dogs have been used to protect anything of value to humans including owners’ belongings, dwellings, land, family and livestock. 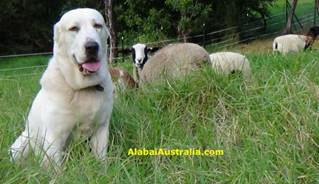 Large, strong and heavy breeds of molosser types as well as sheep dogs are used for guarding and basic shepherding of the flock. Their goal is to counteract anything approaching the herd from outside. At the same time as being brave these dogs have to be calm enough so not to disturb or scare farm animals while on pasture. They have to be kind and tolerant to every animal in the herd. The most suitable breeds according to these criteria are Central Asian Shepherd Dog, Caucasian Shepherd Dog, South Russian Ovcharka, Pyrenean Mountain Dog, Anatolian Shepherd Dog, Majorca Shepherd Dog, Polish Lowland Sheepdog and also mastiffs such as Pyrenean Mastiff, Spanish Mastiff, Tibetan Mastiff.

All livestock guardian breeds can be subdivided into two categories based on the tactics of their work. The dogs in the first category gain insight into livestock behavior. They try to replicate animals’ behavior and form a cohesive whole with the mob. The dog moves at the same time as the flock, rests together with the stock animals while surrounded by them. It watches over the herd by spotting strangers or predators and drives them away by loud barking or, if necessary, by biting. Over time the dog gets so good at blending with the livestock that it becomes difficult to tell it from the stock animals. It mimics the behavior of animals it’s entrusted with. This is especially noticeable in Pyrenean Mountain Dogs which add white coat to their mimics so that it becomes hard to find them among the sheep. Such dogs are unable to move the mob since they do not counteract the animals. At best the flock would follow the dog as its leader and at worst the dog follows the flock that is moved by a shepherd. The most prominent feature of such dogs is constant perfuming their coat with the droppings of the animals it protects. This instinct of hunting dogs serves to mask the dog among the stock animals.

The second category includes breeds of dogs that live near to the flock. They don’t become part of the flock but rather monitor everything from the side. Cattle or sheep do not regard such dogs as similar to them so the herd submits to these dogs more easily when on the move. Such dogs can change direction of or stop the moving herd following commands of the shepherd. The best examples of such breeds are Central Asian Shepherd Dog and 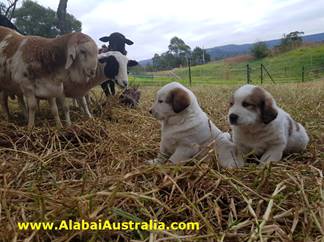 In order to protect livestock animals effectively a dog should treat them as its own. To achieve this a puppy should start living with the farm animals as early as practically possible. Ideally it should be born inside an enclosure with the livestock. This is important so that the puppy learns odors and sounds of the farm animals as early as possible. Contacts with outside environment should be reduced to a minimum. These should be limited to a very basic obedience training: commands to come over to the owner, return to flock, allowing to be touched and manipulated by the owner. Reducing contacts with humans is necessary so that while on pasture the dog could warn approaching strangers before animals in the flock get frightened and start fleeing. Ideally the dog should remain vigilant and monitor its territory at all times.

A puppy should live together with the livestock in order to be in constant contact with the farm animals. The best time for a puppy to leave an enclosed paddock for the open pasture is when it is about 6 months old. It is important to train the puppy to follow the mob whatever happens. Attempts to leave the flock must be punished. If there are experienced adult dogs in the pack then they teach the puppy how to behave correctly so that the training process is natural and requires very little human intervention. The puppy would copy the behavior of adult dogs. When the flock is stationary the dogs shouldn’t move around too much so not to disturb the animals. The correct behavior is when they lay down in some strategic place where they can effectively observe the surroundings.