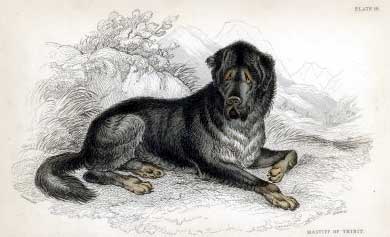 The only way to truly understand any breed is to learn what it was created for, to know the lands it comes from. As regards CASD it is Central Asia in all its magnificent diversity. One has to grasp and realise how immense this region is. It includes Turkmenistan, Uzbekistan, Tajikistan, Kazakhstan, Kirgizstan, areas surrounding Caspian sea and Altai steppe. It is important to know the history of these places: highlands of Tibet, Tien Shan, Pamir and the Great Steppe through which tribes and peoples were passing for centuries. Formation of the breed was influenced by numerous factors. Nontrivial conditions shaped a variety of its types. One cannot single out a particular subtype of the breed and claim that it's the true CASD. This is an additional reason why this breed is so exciting: it hasn't yet froze within the bounds of kennel breeding. Its standardization and kennel breeding started only recently which is a great opportunity for serious breeders.

Defining genealogical links between breeds, finding their common ancestors including those that are among wild canids (even if extinct ones) are extremely important tasks. This knowledge allows to determine which goals of selection are easily achievable, which are hard and which are practically unattainable.

One has to note, that beside consanguinity of the breeds the process of breed development itself is of great interest. Breeds belonging to the first broad group of breeds (so called kennel breeds) are the result of purposeful selection. Such selection usually demanded excellent exterior qualities of the dogs and sometimes (but not necessarily) good working qualities. Influence of natural selection is driven to a minimum. Creation of such a kennel breed continues for dozens of years. However any further breeding experiments may go on for an indefinitely long time.

ther groups of breeds, Central Asian Shepherd Dog included, emerge as a result of an extremely severe selection for certain user qualities: often working qualities and rarely exterior ones. Pressure of natural selection is quite strong. Period of consolidation of a breed can span hundreds or even thousands of years.. Such breeds don't have a common term but they are usually called primitive or breeds of people's selection. The former term is a bit of a misnomer since these breeds exist for many centuries and often rank higher than kennel breeds in perfection, adaptability and specialization. The term "breed of people's selection" isn't very precise either because usually only a small social group is involved with the breeding, not all of the people.

There are two main hypotheses for the emergence of a domestic dog. According to the first one, all breeds of dogs have one common ancestor and the multitude of breeds as such is the result of long process of evolution. According to the second hypothesis, there were several wild ancestors that started different groups of breeds. Lack of actual paleontological material doesn't allow to resolve this ambiguity once and for all. However this problem is interesting not just purely academically. It is closely related to many other questions. For example, why breeds originating from one region and inhabiting it can be very different? The differences are often so large that cannot be explained by different use of the breeds. Another question: why very similar breeds inhabit regions that are hundreds or even thousands kilometres apart?

So which hypothesis is closer to the truth? While trying to solve this problem one has to take into account history of the peoples inhabiting each given region. Dog is the most ancient domesticated animal. It's development unfolded together with the development of human culture and each group of breeds was closely linked to the concrete type of human culture. The following facts support polyphyletic hypothesis: approximately at the same time there existed heavy dogs of the East, greyhound-like dogs of North Africa and small Pomeranian-like dogs of Europe. It is extremely difficult to argue that such quick separation of one ancestral species into three substantially different forms is possible. It is hard even to imagine the common path for domestication of both guard and hunting dogs.

It is suggested that there were two ways for domestication that are not mutually exclusive and that don't contradict existing data. Small gregarious canids could have been the ancestors of hunting dogs which, most likely, were in cooperation with other larger predators. Such c

ooperation exists in present between jackals and lions and also between hyenas and lions. Protecting a territory couldn't be their primary task: such luxury is rarely affordable for a small predator.

Now let us consider in more detail a group of breeds called molossoids or mastiffs. By all appearances they were domesticated in a different way. It is likely that their ancestors were large and, possibly, cave-inhabiting canids. Common protection of cave complexes could be the basis for their union with cavemen since both species used caves as their home. Such dogs are guards by their nature. One has to note that the widespread use of mastiffs as wolfhounds shouldn't be interpreted as hunting use: it is common for predators of one species to exterminate (if it is possible) competing predators of other species found within their territory.

It is universally accepted that Tibet was the origin where this group had emerged. Then guard dogs were spreading to the west together with waves of nomads. While their lifestyle was changing to a nomadic one a "sense of ownership" of the dogs necessarily redirected from territory to the main possession of the owner: cattle. In this way ancient mastiff assumed roles of livestock guard and, to some degree, a shepherd. Some more powerful and spiteful dogs were selected not for protection but for aggression: thereby breeds designated for military use started to emerge. These animals reached formidable sizes and were famous for their fearlessness and malice. Of course precise barrier between military dogs and livestock guards didn't exist. They mixed. Furthermore, waves of relocating peoples carried emerging mastiff breeds to new habitats.

As far as breed formation is concerned the extremely interesting situation developed in Central Asia. On the one hand, this region is directly adjacent to the origin of the breed group and on the other hand, the Great Steppe (vast prairie and semi-desert lands spanning from Mongolia and Northern China to Danube river) runs through it. Ancient trails of nomads were crossing the Great Steppe. This region was neighbouring to ancient kingdoms of the East and periodically incorporated in them. Thus the present day Central Asian Shepherd Dog has blood of the most ancient dogs of Tibet, shepherd dogs of various nomadic tribes and military dogs of Mesopotamia.

nfortunately there's one more bidder for the role of CASD relative. In all places where there are wolves one can hear legends about wolf-dogs which, allegedly, surpass normal dogs in intelligence strength or any other quality. Locals especially like to tell such fairytales to novices who first come to the places of origin of some breed, whether it is a Central Asian Shepherd Dog or a Northern Bear Dog. Such stories are then peddled to dog breeders as "eyewitness accounts". Even though these stories have some interest for folklore collectors they are detrimental to dog-breeding because they can be used as justification for uncontrolled mating. Since even these days in the places of natural habitation of Central Asian Shepherd Dog many dogs are still kept traditionally without any leashes or fences just like in the times of Alexander the Great. A bitch in season runs around on its own looking for a mate. Obviously, if she brings strange puppies of sable colour the owner wouldn't admit that a sire of these freaks is an East European Shepherd. He would proudly claim that it was a wolf. But the proponents of mixing in "wolf blood" often overlook some obvious observations:

Thus it is absolutely obvious that wolf isn't among the close relatives of Central Asian Shepherd Dog.

However many dog breeders are fond of legends. In Central Asia this kind of people will be generously bestowed with stories about brindle coloured dogs originating from a white bitch which was tied down on the tiger trail by the orders of Alexander the Great. The fairytale about the birth of the most powerful wolfhounds form dogs and hyenas doesn't even require any comments.